By Katie Egart on August 5, 2016 in Uncategorized 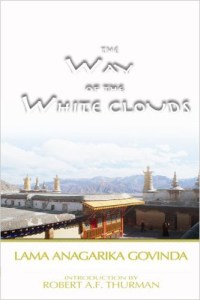 The Way of the White Clouds: A Buddhist Pilgrim in Tibet

Lama Anagarika Govinda was one of the last foreigners to journey through Tibet before the Chinese invasion of 1950. A devoted Buddhist and a spokesman for Tibetan culture, Govinda’s luminous and candid account is a spectacular and gloriously poetic story of exploration and discovery, and a sensitive and lucid interpretation of Tibetan traditions. Robert Thurman’s perceptive new introduction to the volume places Govinda’s writings in historical context and opens a new door on understanding Tibet, Buddhism, and the life of a remarkable man who, as Thurman remarks, is “undoubtedly one of the West’s greatest minds of the twentieth century, a member of the pantheon that includes Einstein, Heisenberg, Wittgenstein, Solzhenitsyn, Gandhi, and the Dalai Lama.”

Copies of this book will be available at the Epic Bookshop in Yellow Springs.