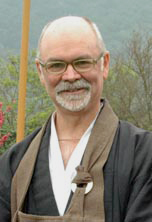 Daniel Terragno Roshi was named guiding teacher for the Zen group in 2001. At that time the Dharma Center made a commitment to sponsor 2 retreats a year that he would lead. Each year two sesshins (Zen retreats) are held, one in the spring and one in the fall.

Daniel is a teacher in the Diamond Sangha tradition (founded by Robert Aitken) and is a Dharma heir of John Tarrant. A native of Chile, he now resides in Sebastopol, California, and is the founder of the Rocks and Clouds Zendo there.

In addition to coming to Ohio, Daniel leads sesshin, talks and conferences in Argentina and Chile twice a year. The Argentine group is Viento del Sur. The group in Chile is Zen Montanas y Mar.

The Memorial Day Retreat was held on Zoom May 2020.  Roshi’s teishos can be viewed here:

What does it mean to have Daniel as the guiding teacher?

1. There will be times when our group will have questions and can turn to him for guidance.
2. There will be times when Daniel will make suggestions to enliven and deepen our practice alone/together.
3. When Daniel makes suggestions for the sangha, the group will meet to understand the suggestions and to consider the implementation. The suggestions will be conveyed from Daniel through a designated student to inform the sangha.
4. Though the majority of us have chosen him as our teacher, no one should feel any obligation to choose him for their personal teacher.
5. We consider our group a sangha and each person is an important member. There is no distinction between students of Daniel and non-students of Daniel in terms of respect and appreciation.
6. The Zen group may invite other teachers to give talks and practice with us.
7. It is traditional for those who have selected Daniel as their teacher to provide him with dana. It can be monthly, quarterly, semi-annually or yearly. Sent via Rocks and Clouds Zendo, it is tax deductible. Since he is the guiding teacher for the group, members of the group who have not chosen him as their teacher may also give dana if they wish.